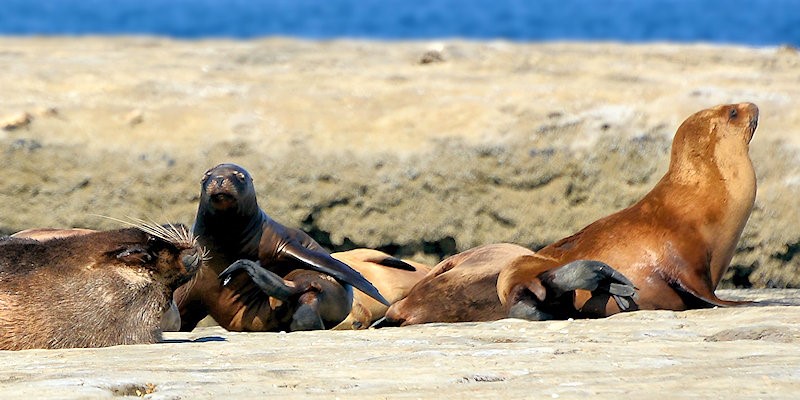 Peninsula Valdés, so named by the Italian Antonio Malaspina, visiting the region between 1789 and 1794, gave this name in honor of the Spanish Minister Antonio Valdés. The round-shaped peninsula, joined to the mainland by the narrow strip of the isthmus Carlos Ameghino. Its northern shore we find the wide bay of the Golfo San Jose and southern tip of Morro Nuevo marks the entrance to the Gulf Nuevo. In 1999, Peninsula Valdés is a UNESCO World Heritage dell`Umanità.
The Peninsula is reached by moving from Puerto Madryn city to reach the small town of Puerto Piramides overlooking the Golfo Nuevo. A few km before Puerto Piramides we find the entrance to the reserve where you pay a small entrance fee, immediately after it is the interpretive center "Istmo Carlos Ameghino" with its museum useful to introduce tourists to the environment that will visit. Next to the center stands the Observation Tower, from where visitors can simultaneously watch Golfo San Jose and Golfo Nuevo. Internal gravel roads to the Valdés Peninsula lead to places and scenarios where nature reigns supreme, without significant vegetation, here you will find large colonies of sea elephants. 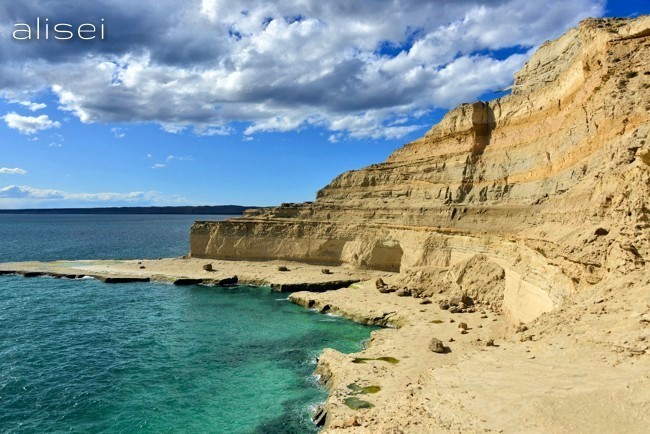 The small town of Puerto Piramides overlooking the Golfo Nuevo is the starting point for marine excursions, the coast goes down and the tides in this gulf is considerable (also recorded 11 vertical meters) so not to allow the construction of a port and / or jetties and here inventiveness it manifested through the construction of metal structures with wheels that support the boats when they are on the beach (the same situation as when you bring a boat for storage), allowing it easy boarding and disembarking tourists. When it's time to leave, the boat on these metal supports is pushed into the water by powerful tractors as long as the boat is not able to float independently. Similar procedure for the return, the tractor with the metal support is brought into the water in a position such that the boat is able to approach and to be hooked to the support structure, then the tractor carrying the boat on the beach with tourists on board for landing. 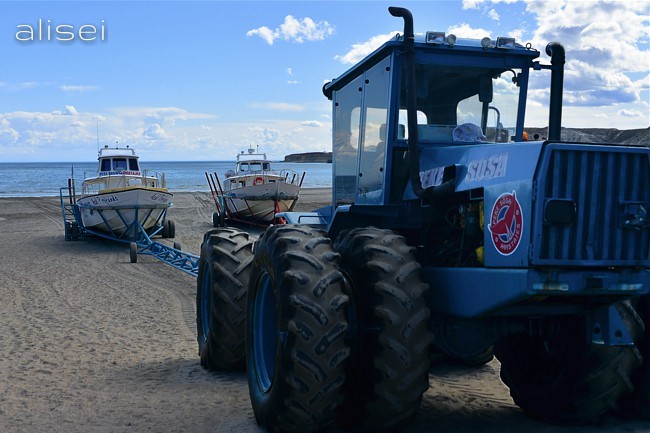 Marine mammal belonging to the suborder of baleen whales, so named for having the baleen instead of teeth. the baleen are also two meters long beards that are detached from the upper jaw of the animal and allow the whale to expel water ingested holding the krill and plankton, which are its main food. The body, which reaches a length of over 13 meters in the female weighs 40 tons, has no dorsal fin and the typical ventral furrows of other baleen whales.
The head, which alone represents 25% of the total body length, and on which there are two vents through which exits the characteristic puff, is covered in patches of barnacles cheratiniformi called callosities, which house the whale lice, a parasite microfauna different from individual to individual, so as to distinguish the individual animal.

Its presence in the Peninsula Valdés, both in the Gulf and in the Gulf Nuevo San José, starts in May and continues until October and is due to the need
the animal to find a quiet retreat where to give birth and wean calves. The births of small typically occur between June and September, after a gestation period of 12 months. Starting in October, as soon as the children have sufficiently developed, the animals return to the open sea in search of the most fish-rich waters and already in December are very rare sightings.
Marine excursions lead tourists in areas where these whales normally stationed and manifest themselves in the traditional way when the whale emerges slightly for air or dramatically when some specimens is "fun" to perform amazing jumps and stunts that seem out of the water impossible for an animal of this size and weight. 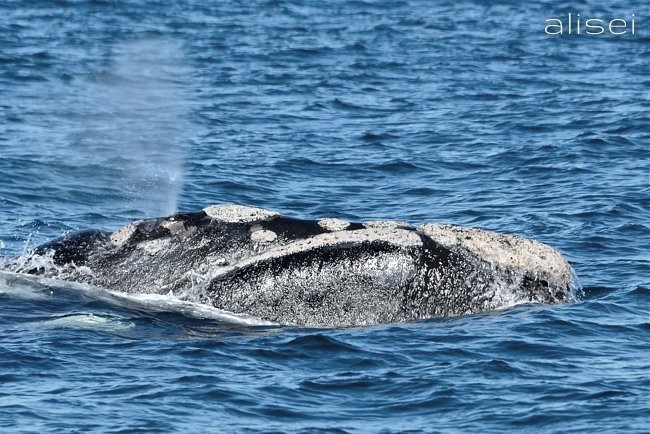 It's a mammal belonging to the order of pinnipeds and the otariids family, with ear and able to use the hind legs for walking. The fur is brownish in color, with different shades depending on the age and sex of the animal.
The adult males, which may exceed the length of two meters coming to weigh 350 kg, can be recognized by the characteristic swelling of the neck covered by a thick yellowish hair, hence the common name of sea lion. The females, smaller and slender, with the sharpest head, usually not more than a meter and a half in length and 70 kg in weight. 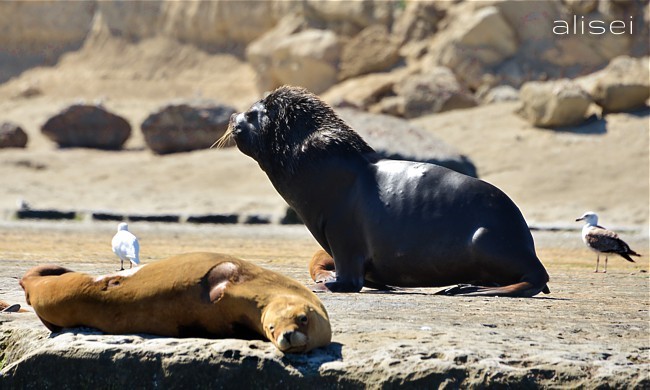 The colonies usually settle on headlands and bays naturally protected from the attacks of the land predators, here breeding males, already in December, fighting fierce battles to mark the area that will host the females, even fifteen, which will establish their own harem. Immediately after giving birth take place the pair, and only once fertilized the female will leave the Sultan and swim to feed and to bring food to the baby.
Excursions to meet these creatures are held using the previously described large speedboats with them lapping part of the peninsula where tovano colonies of fur seals and sea lions and elephant seals big, clumsy animals all in their development when they are down, but faster and agile in water. In the colonies there is always agitated, screams and disagreements between sea lions to find spaces to lie in the sun (as if here lacked the space !!!) and "roars" by the sea lions from the dark coat and yellowish hair that face to protect their harems. 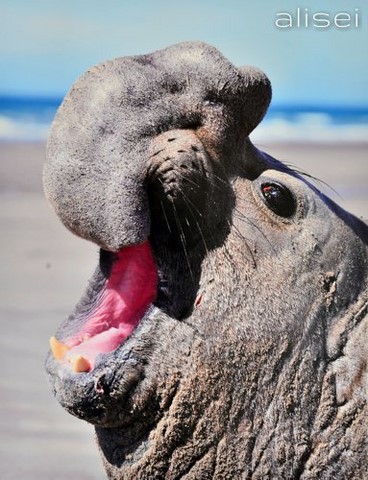 Del sur elephant seal (Mirounga leonine) pinniped belonging to the family of Focidi, the elephant seal and forced to move crawling and doing back-ventral movements with the front flippers, since the latter are for bone conformation rigidly backwards.
The name of the elephant seal comes from the length and mobility of the nose that characterizes the male, a true miniature trunk that
swells and is accentuated when the animal is irritated. The animal's size is remarkable, adult males up to 6 meters in length and reach the 4 tons of weight, while females, smaller, rarely exceeds 3 meters and 700 kg.
The reproductive cycle of the species began in July, with the landing on the beaches of the peninsula of the first big males, who immediately set the boundaries of their territory (harem) pending the arrival of females, usually in the first fortnight of August. After 2/3 weeks, accomplished a gestation period of 12 months, females give birth to a small which is already one meter long and weighs more than 30 kg. Two weeks after delivery the female goes into heat again and begin the pair, who continue throughout the month of October.

Belonging to the family of Delphinidae, black on the back and white in the belly, the orca is the largest of its kind.
Killer whales usually meet in mixed flocks of adult males and females and cubs, and they use ultrasound to locate prey and obstacles under the water. The head of the group is driving the chase, teaching art to younger fish. On the Valdés Peninsula you can be observed especially between the months of February and April and between October and November, especially in Punta Norte, Caleta Valdés and the Gulf San José. Killer whales of Patagonia are considered the world expert in intentional stranding as a power strategy. The ability to execute it requires a long period of learning that takes place partly in the Valdés Peninsula. The orca is a perfect combination of strength, agility and speed, and is one of the main rings of delicate marine ecological system by making a real genetic selection of marine species.

Series of albums with the most interesting and curious photos taken during the whole trip in Argentina.

Photos slideshow collected in a single gallery to the most remarkable shots of Patagonia.

There are many curiosities of this country as the history of the Gaucho, the Calafate legend the origins of the tango ..... 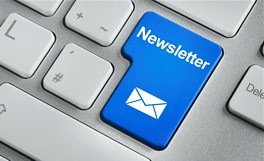 Heritage of UNESCO this large park is considered one of the most representative from the point of view of nature & landscape.

History and culture of the ancient people of Patagonia told through photos on display in the Museum of the Glacier Park El Calafate.

La Reserva Geological Bosque Petrificado José Ormaechea is a site where the petrification of the trees of the Tertiary is visible.

A great nation that offers the tourist large spaces, a wild nature, beautiful beaches and life ....

Inca territory with many archaeological sites, rich in colonial culture and with an incredible wild nature ....